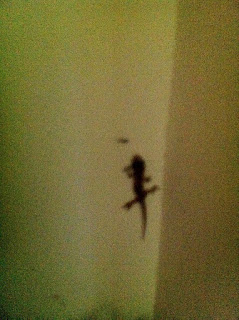 I was in bed by seven last night and up by five today. The silence is absolute and the cleanliness of my surroundings is thorough. No insects appeared last night and I am grateful. My entire body is wrapped in humid warmth and when I opened the windows this morning, the temperature outside was exactly the same as what I had slept in.

But the windows open, the hotpot works, and the Vietnamese  metal coffee filter that I bought at Modern Trading before I left Seattle makes a very espresso-like cup of coffee. The dining room table is just the right height for typing and the chairs have supportive backs. I am a happy and fortunate woman; this is all lightyears away from my usual Hong Kong experience.

Mist is coming in threads down the hills that I can see from the kitchen window and the weather forecast promises a morning of heavy rainfall. However one of the cleaning ladies yesterday had brought out an umbrella early on in our encounter and left it by the door, looking at me in a way that told me I was a complete fool not to have brought one with me. This is indisputably true,

But I am a very fortunate fool who is cherishing every minute of privacy and the run of the house before five men from Indonesia join me tonight around eight. Given this morning's pre-dawn wake-up call, I will be sound asleep when they arrive.
Posted by Janet Brown at 3:10 PM 1 comment: 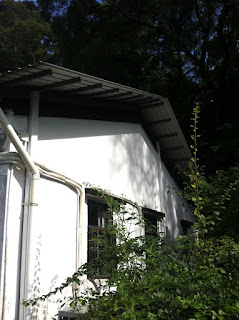 The thought of dragging my suitcases back up the stairs and through the mud to eventually end up at Chungking Mansions was a dismal one that must have shown on my face, because Eugenia smiled. "We will honor your reservation," she said, "Don't worry."

We agreed to work on a week-by-week basis and I paid her for a week. Pang led me back through the rain to Ascension House and took me to a room that was in a private wing, with its own bathroom down the hall. He gave me sheets, a towel, an adaptor plug, and the wifi password, showing me the faucet at the kitchen sink that dispensed drinking water. Then he left me in complete silence, except for the sound of dripping rain.

I killed a spider when I made my bed and hoped desperately that there would be no reprisals. I unpacked my belongings and found that even the copies of the New York Review of Books that I'd brought with me because of the review of Ma Thanegi that they contained were very, very wet. Fortunately the books I brought as presents for two little girls I'd put in a plastic bag so they were still perfect. I hung up my damp garments in the bathrooms and prayed they would dry. The pervasive smell of incipient mildew did little to reassure me that they would.

But the wifi worked and the kitchen was fully equipped, right down to instant noodles, for sale at ten HK dollars a pack. I put my bag of Seattle coffee on the counter and felt hopeful.
Posted by Janet Brown at 2:52 PM No comments:

"The cleaning ladies sent me," he explained, "they were very surprised that you carried two heavy suitcases all the way down the hill."

I told him about my reservation and where I had come from and he said, "Come with me and have lunch. I"ll discuss this with the staff." Back up the muddy hill we went and into a huge hall filled with tables. A mammoth lunch appeared before me and I was told to sit. Be quiet was implict in the surroundings.

Pillars decorated at the top in Chinese style supported a Scandinavian buttressed roof. The fish in lemon sauce was delectable and I felt my clothes begin to dry. A serious lady with kind eyes came into the hallway, with an equally serious young man. Eugenia and Pang both spoke my native tongue fluently, as did Barry, my rescuer, and between the three of them, they presented the facts. 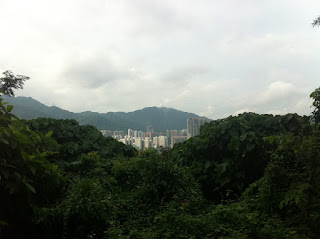 The taxi driver had pulled up under a covered gate to give me my bags but his kindness was futile. By the time I made it to the path that went through the woods and down the hill, I was saturated, hair dripping under my fake pashmina, feet beginnning to wrinkle from the damp. When I finally dragged my two suitcases to the porch of Ascension House, I was delighted to see that someone was inside.

The lady who let me in was more puzzled than delighted, and so was her coworker. The only word they understood from me was the name of the manager who had given me my reservation for the coming month and the only words I understood from them were "gone" and "no." But I was soaking wet and they were kind. They let me in and handed me a cloth bag labeled "hairdryer."

We tried to make ourselves comprehensible in English and Chinese, failed miserably, and one of the ladies made a phone call. A man who spoke English was easily as confused as the three of us were; the only clear fact was I had a reservation and nobody knew about it. "I'll call you back," he said but then the two ladies smiled, said goodbye, and left me in an empty house, taking the phone with them.

I used the hairdryer, wondering what else I could do. After about half an hour, I heard a knock on the door, and there was a man smiling and saying, "I think you are not where you are meant to be."
Posted by Janet Brown at 2:29 PM No comments: